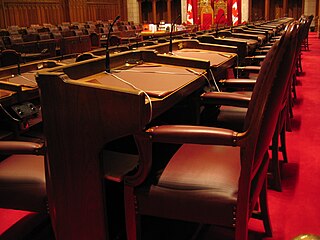 Inside the Senate of Canada, Created & uploaded by Xiaphias at en.wikipedia CC BY-SA 3.0, via Wikimedia Commons

The Heritage Group came away from its regular October gathering with a new appreciation for a once venerable institution that more recently has been much disparaged, the Canadian Senate. Our guest, the Hon. Terry Stratton, retired from this “beautiful place” in 2013. And his fond reminiscences of twenty years in the Upper House revealed a deep affection for both the red chamber itself, and its dedicated and capable senators. As he pointed out, you’ll find a few bad people in any large organization, but they get sent to jail when caught and should not be allowed taint the good work done by the many.

Terry shared that his Heritage Group visit was his first time back on campus in 40 years, having started teaching in the Architectural Technology program in 1969. Born in Winnipeg, Terry enjoyed a long and varied political career that began with the Manitoba Progressive Conservative Party in 1975. He worked on several election campaigns, including those for Jake Epp, Susan Thompson, and Sam Katz, and in 1990 became Vice President of the Western-PC Party of Canada. While a Senator he served variously as Whip of the Opposition, Deputy Leader of the Opposition, Chief Government Whip, Chair of the Conflict of Interest Committee, Co-Chair of the Joint Sub Committee for Security on the Hill, and member of the Senate Standing Committee on Rules, Procedures and the Rights of Parliament.

The battering the Senate has endured at the hands of both press and politicians these past few years saddens Terry. On one hand, partisan politics has undermined its role as a venue for “sober second thought”, and forgotten is all the good work done by Senate committees in reviewing legislation, particularly in the case of omnibus bills. On the other, problematic is the broad discretion senators enjoy in deciding how to spend millions of dollars. Despite recent attempts to codify administrative rules, policies and guidelines remain notoriously vague and confusing. Both the Senate and the House of Commons have had their share of scandals because many “rules” have traditionally been deliberately imprecise. And though members are bound by tradition to behave “honourably”, some people’s ethics have proven to be as pliant as the rules.

Terry concedes that reform should have taken place long ago, but that it will likely never happen. The debate over the years has swung from reform to abolition to elected senators, but none of the three seems likely.

Unanimous consent of the provinces is required for any change, something that has historically been elusive. The best attempt at reform was the Meech Lake Accord, negotiated in 1987 and ultimately defeated when rejected by Manitoba in 1990.

Terry tried to explain why this option is highly unlikely with a bit of a history lesson. Confederation was made possible by dividing Senate representation across four geographic regions: Ontario, Quebec, the Maritimes, and the Western provinces. Each region holds 24 seats. Six more were added for Newfoundland and Labrador when it became a Canadian province in 1949, and one more for each of Canada’s three territories—the Northwest Territories, the Yukon, and Nunavut—for a total of 105. As the Western provinces increase in population, so does their power in the House of Commons. But all legislation must pass both houses (House of Commons and Senate). So, since the eastern provinces want to maintain their power in the Senate, abolition is not in their best interest.

Alberta has done it, so it is possible. However, other provinces fear that elected senators would have more power and influence in Ottawa than the Premier (there are six Senators from Manitoba, for example).

No one know what will ultimately become of the Senate. But the Hon. Terry Tratton feels that, as has happened in other jurisdictions, reform is possible and that the Senate should regain its former importance as a vital arm of our democracy. He carries many fond memories and is thankful for the opportunities he has had to work with many capable and dedicated people, doing important work in service to all Canadians. In the end, however, Terry conceded that retirement is “bloody wonderful!”

Thank you Terry for your life of service, and thank you for taking time out from your retirement to enlighten us this Thursday morning.